Skip to content
Home/News/C.H.A.M.P. Camp Wraps Up Saturday
Previous Next 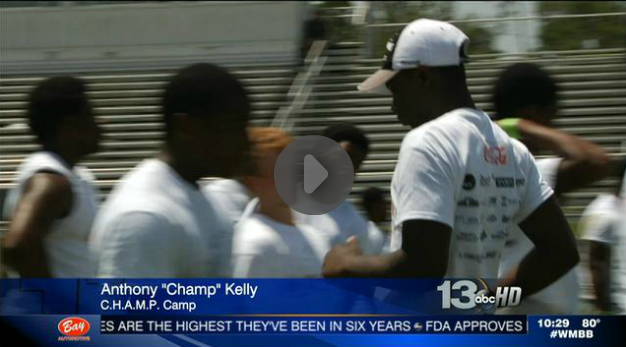 For the fifth straight year, Graceville graduate Anthony “Champ” Kelly returned to the Panhandle for his annual C.H.A.M.P. Camp, and the second and final day wrapped up on Saturday, with record numbers participating.

Close to 300 kids from 10-18 took part in this year’s camp, receiving one on one instruction from former collegiate and even professional players. Several of Champ’s former teammates at Graceville and at Kentucky also make the trip every year to help out with the camp, and not one of them gets paid for their time, and Champ grateful for everyone’s hard work in making his dream a reality.

“For me, I try to surround myself with high quality, high caliber guys,” he said. “That’s what we tell the kids. You are who you hang around. I hang around with top notch guys, and they are here wanting to give back and wanting to invest. That doesn’t say a lot about me, it says a lot about them. They have the great hearts, they’re willing to sacrifice their time and they’re willing to invest in these kids.”

Those high caliber guys agree it’s a no brainier to help Champ year after year.

“Champ is a great person to be around,” said Leonard Burress, who played with Champ at Kentucky and on an Arena Football League team. “I think the number one goal is to surround yourself with great people. Champ is one of those people that you want to surround yourself around.”
“Two years ago, Champ was helping me on the recruiting person,” said Kobe McCrary, who is a four year camper turned coach for this year’s C.H.A.M.P. Camp. “He’s a good person. He called me up and contacted me. Coach Champ helped me, so I figured I’d help him back.”

Helping him back is what keeps C.H.A.M.P. Camp going year after year. Each coach is unpaid, and each wants to better the kids.
“It’s a testament to these coaches that the kids showed up,” said Champ. “They’re eager to learn, and they realize that these guys have a lot of knowledge. They’re able to learn a lot about football and a lot about life. We just want to invest time and invest into the lives of these kids, because we think they are our today, and they are also our future.”

A future that’s showing in the coaches, like Kobe, or Will Witherspoon, a 12 year NFL veteran who’s giving back to the community that helped raise him.

“Anytime I get to come home and do something like this, where I get to enjoy being at home, and being part of the community, and enjoy having fun with kids really and teaching them life lessons that I’ve learned, and trying to make sure they don’t make any mistakes along the way,” Witherspoon said.

“You bring a guy like Will Witherspoon back, who is a Bay County guy,” said Champ. “For those kids to get a chance to get a tangible example of what they can be if they work hard, if they make good choices in school, if they educate themselves, if they set their priorities, it’s awesome to see these kids look up to guys like that.”
Guys like that, and guys like Champ, who keeps people coming back around.